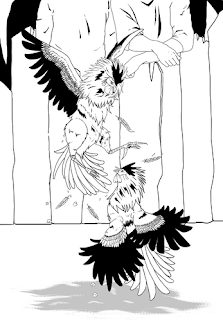 Cockamania! is a 30-page mini-setting based in Filipino culture and folklore. Cockfighting is the main theme of the text, but it also includes mythological backstory, a small list of wilderness encounters, village politics, and even some recipes for cooking defeated cocks. The writing is evocative and draws you into its world. The biggest flaw with the supplement is a lack of immediate usability. After reading it, I immediately wanted to run an adventure in this setting, but I felt like it would take a lot of work on my part to get something playable out of the text.

Reading Cockamania is at first a bit disorienting. Many Filipino words are dropped into the text unexplained. Things become clearer once you reach the appendices that offer translations and an explanation of the gender-neutral pronouns used for certain characters. Overall, I liked the feeling that the writer was speaking honestly from their culture rather than translating everything for a Western viewpoint. I still would have preferred to have those appendices at the front of the book.

Once you get a handle on the vocabulary, the world of Sabungan village comes alive. Small details like the recipes and gambling rules give texture to the setting. The cockfights are tied in to a mythic drama involving spirits and demi-gods, which will soon intrude decisively on the villagers' everyday lives. After the village section there are some excellent wilderness encounters, some of which could form separate adventures of their own.

"Could" is the operative word here. The book isn't really ready for use at the table. In fact there is practically no mention of PCs at all, no discussion of what they might do or how they might be involved in the situation. There is a lot of backstory, but from the players' point of view the story begins with a giant goddess showing up, demanding something nobody has heard of, and threatening to eat people if she doesn't get it. OK, that's a good hook, but what happens next? How do the PCs find out any of the backstory?

Likewise, a lot of the random encounters (in village and wilderness) give no impetus for the PCs to interact with them. "A happy gambler". "2d4 wild jungle fowl". It's up to the GM or the players to squeeze out a narrative from these, with little support from the text.

Last of my criticisms about usability is the layout. The PDF has huge amounts of white space - the text could probably have been condensed to fit in less than half as many pages. Also, having recipes and cultural details scattered throughout makes it interesting to read through, but would probably add a lot of mental overhead during gameplay.

These criticisms are not dealbreakers, though. If you are interested in Asian fantasy written by Asian people, or intertextual RPG materials, Cockamania is well worth checking out.
at February 12, 2020

Cockamania! is a 30-page mini-setting based in Filipino culture and folklore. Cockfighting is the main theme of the text, but it also i...